Whether you believe in God or evolution, you likely believe in the miracle of life and that the body is perfectly created or evolved.  Unfortunately, many people in this country do not realize the male foreskin is not the exception to this perfection and mistakenly think it is better to have the most sensitive part of their son's body painfully ripped and sliced away.  However, it is not "just a useless flap of skin," which is why all mammals have a prepuce.  As with any perfect design, you cannot change form without altering function.

"So God created man in His own image; in the image of God He created him; male and female He created them.  Then God saw everything that He had made, and indeed it was very good."  -- Genesis 1:27, 31

"For You formed my inward parts; You covered me in my mother's womb.  I will praise You, for I am fearfully and wonderfully made; Marvelous are Your works, And that my soul knows very well." -- Psalm 139:13-14

"Natural selection will never produce in a being anything injurious to itself, for natural selection acts solely by and for the good of each.  No organ will be formed, as Paley has remarked, for the purpose of causing pain or for doing an injury to its possessor." -- Charles Darwin

What does this have to do with gardening?  Mother Nature repeats Herself, and as I work in the garden, I see many ways in which She similarly creates and protects Her creation and interference destroys Her perfect design.  Even most non-gardeners realize natural and organic products are superior to those altered or polluted by man (in reality, natural is the standard and less is inferior). To believe in the wonders of the Universe or the miracle of life, yet at the same time think every human male is born "defective" or that the foreskin is "useless" does not make sense.  To think that the foreskin can be amputated without negative consequences is ignorant. 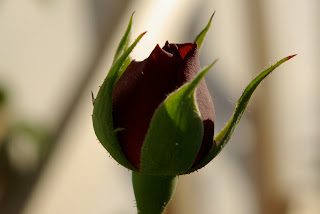 I have read of circumcisers comparing the freshly circumcised infant penis to a "beautiful little rosebud."  I have made a similar comparison myself of the natural penis, but there is none of a rose's beauty in a raw, wounded organ.  We have all admired a beautiful, perfectly formed rose bud.  Never would we rush to open the calyx of a rose in order to expose the bud.  We know the calyx protects the developing rose, so we allow the bud to gently unfold and mature in its own due time.  To cut or forcefully open the rose would destroy its beauty.  It still would mature, be able to pollinate and form a hip, which to the rose bush itself, is the only goal.  In fact, breeders who are not concerned with the beauty of the individual flower do a form of this, but most people would agree that to do so routinely would be mutilation.  A mutilated penis (NSFW) is also usually able to gain some enjoyment and procreate, but like seeing in black and white, the full spectrum of beauty that Nature intended is lost.

The same perfect design on a daffodil.

The flower buds of Canadian ginger and rhubarb.
Nature reveals Its creation only when the time is right.
(Click images to enlarge and reveal detail.) 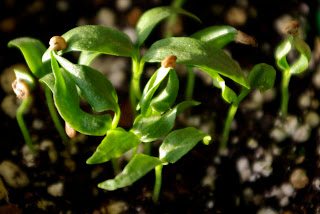 Having grown many plants from seed, I have observed that on seedlings, some hulls take longer to drop away than others.  Trying to help the seedlings, a number of times I tried to remove the hull.  The lesson learned?  Some seedlings take a little longer to develop and need the hull to provide protection and perhaps further nutrients, but they are still perfectly normal.  If I do not remove the hull, occasionally the seedling never advances and eventually wilts away.  If I do remove the hull, even if it is still barely attached, the seedling is damaged and usually does not survive.  Even if a baby boy does not die from circumcision (in the U.S., over 117 boys a year die from circumcision), when a functioning part is amputated, the body is damaged.  In early life, the foreskin is fused to the glans (head of the penis) in the same way a fingernail is fused to the finger, and forcefully retracting it causes damage.  This is why some natural ("uncircumcised") males have problems and are circumcised later in life.  In other cultures (the majority of the world does not circumcise), the foreskin is left alone, and problems are virtually unheard of even in old age.  Like the seedling, the boy himself knows when the time is right to retract his own foreskin.  (There are rare cases of phimosis, but this can only be diagnosed after puberty and can be treated without cutting.) 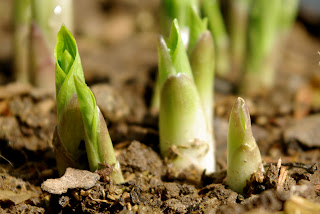 Walking through the yard, I noticed that hostas emerge very phallic like.  As I looked closer, I realized the comparison was even more than I first observed. To protect the hosta as it pushes through the soil, it is covered in a sort of protective sheath.  As the hosta grows out of the sheath, the more mature outer leaves continue to encapsulate and protect the delicate, still forming inner leaves from a late frost or a few nibbles from a hungry critter.  As the outer, sometimes slightly damaged leaves unfold, the fresh inner leaves reveal their beauty.  It would not make sense to remove the sheath or outer leaves early to "protect" the plant.  Just like those outer leaves, the foreskin protects the penis from frostbite, zippers and even the wear and tear of daily life which causes desensitizing keratinization (NSFW) on an unprotected glans.  As the foreskin is studied, even more ways in which it protects and serves are being discovered.  The major difference between the foreskin and those outer leaves on the hosta is well stated in this quote, "The foreskin is not the wrapper, it's the candy."

A peony emerging from the soil, then from the protection of its sheath.

The protective sheaths of emerging lily of the valley, baptisia and Solomon's seal.  One can observe this again and again throughout Nature.  If plants and animals are designed or evolved so perfectly, why would the human male be any less? 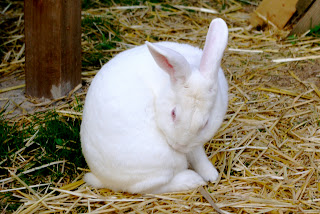 One of the most often used excuses for amputating the foreskin is hygiene. While soap and running water are no doubt a benefit to humanity, there are still valuable lessons to be learned about hygiene from Nature.  Animals do not use soap and water to bath as humans do, yet I have never heard of one getting an infection of the foreskin or needing to be circumcised.  But then, people do not tend to tamper with animal foreskins to create those problems.

Females produce smegma, too, yet despite all the products sold to "prevent odor," few advocate genital cutting to promote female hygiene.  Though it is more difficult for a female to get to all of her folds and crevices than a male to retract his foreskin, she is entrusted to do so.  People should not insult their sons by assuming they will grow up to be incompetent slobs.  Of course, any part from teeth to toes are "easier to clean" if removed, but to quote Craig Ferguson, who is intact, "You can have this chopped off or you can wash it ... That's a tough choice there, doctor." Amputation is not hygiene and everyone needs to wash, cut or not.

I ask that you view the comparative photos in the following links ... Keratinization and Circumcision Status (NSFW) and Introduction to the natural, intact penis (NSFW).  If you hear the thousands of words these pictures speak, you will agree there is good reason intactivists consider circumcision genital mutilation.  Perhaps in the natural, you will even see the similarity of a rose bud in its perfect form.

Planting the Seeds of Change

I was about ten years old when I first learned of circumcision.  The first thought to come into my non-indoctrinated mind and out of my mouth was, "What if he doesn't want to be circumcised?  It's his body and it can't be undone."  I knew nothing of the pain or loss, only that it was not necessary and that it was wrong to cut other people's body parts off.  That was enough for me to decide then and there that if I ever had sons, they would not be circumcised.

It is only through questioning that we can see where there is fallacy in long held beliefs and create change.  When it comes to circumcision, frequently questions and change are met by mockery and anger.  The person who says, "Baby boys are born perfect.  Love them enough to keep them that way." is considered crazy, penis obsessed, and even perverted while the person who says, "Baby boys are born ugly, dirty and unhealthy.  You should amputate the most sensitive part of their manhood before they can refuse." is considered normal, sane and their motives are never questioned.  How backwards is that?!  Our boys and men deserve better!  I ask that you challenge any beliefs you may hold regarding circumcision with the following questions.

This is about human rights.  No medical organization in the world recommends routine infant circumcision; it is medically unnecessary.  Circumcision is a personal choice.  Sadly, some confuse a personal choice with a parental decision, which is not the same thing.  When the parental decision is to circumcise, the right of personal choice is stolen from the only person whose opinion matters, the person who has to live with the decision, the person himself.  This violation is something that even the most violent criminal is protected from.  His body, his choice.


"When You Know Better, You Do Better."
-- Maya Angelou

I am not judging anyone who had their son(s) circumcised because they did not know any better. Since the late 1800's when it was promoted in the U.S. to prevent masturbation, circumcision has been a "cure" searching for a disease, and whatever the scare of the era, it was said to prevent.  There is still a lot of misinformation promoting circumcision that is spread as fact, even by those who should know better.  It takes a very strong person to admit they have made a mistake and a very strong man to admit he has been harmed.  I have the utmost respect for those who have done just that and have chosen to protect their sons rather than continue a painful cycle.

Circumcision ...
The more you know, the more you're against it!