The rose bushes outdid themselves this spring when producing buds.  We had a few frosts afterwards, so I assumed that was what caused the damage on some of the buds.  But wait! Newer buds were looking a bit damaged, too.  Hmm ... the plants all looked fine, so surely it would grow out of it.

A few days ago I was working at the Rose Lady's house.  Some of her roses had the same damage.  I asked her if it was frost or what.  She said it may have been, but last year she had problems with thrips, so they may be back.

Thrips?  Home to the internet I came and checked it out.  Come to find out, they are tiny little bugs that burrow deep into the buds and are very hard to get rid of.  I went out and pulled back the calyx of some of the bad looking buds, and sure enough, little critters scampered out of sight.  I looked into the petals of the open roses and found them in many of them, too.  What to do now? A lot of experimenting. 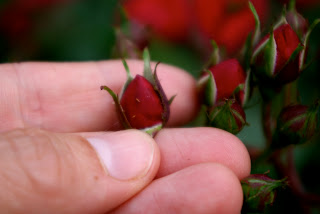 Thrips look like tiny slivers inside the rose bud.

I began with the first suggestion, something that was very painful to do.  I cut all of the flowers and buds from 'Tess of the D'Urbervilles' and 'Graham Thomas' and threw them in the trash.  From what I have read, that disrupts the life cycle enough that it may get rid of them.  My well established unknown rose appeared free of thrips at first glance.

After that, recommendations became conflicting.  Some sources recommended a systemic pesticide (the pesticide is drawn into the vascular system of the plant, making the plant toxic to the insects eating it), so I immediately bought Bayer Tree & Shrub Protect & Feed.  I then double checked the unknown rose and found that it did, indeed have thrips.  Being so abundantly full of buds and blooms, I could not bring myself to cut it back, so I simply applied the systemic pesticide while I was treating the other two roses.  Then, upon doing more research, some sources said that the vascular system of the plant differs from that of the flower, so systemic pesticides do not work.

Some sources recommended Neem oil while others said it does not work because the thrips burrow into the rose and do not necessarily come into contact with it.  Being as it does not harm beneficial insects unless they are sprayed with it, I bought some, and late in the evening, sprayed the unknown rose.  That, too, appeared to be pointless.

Today I finally gave the Rose Lady a call to ask her what she uses.  She did not know the name of it, but told me to come by and she would give me some.  The product turned out to be Conserve SC.  I had an internal battle as to whether or not to use it, but in the end I did.  I hate using pesticides, but if I am going to have roses, it may be necessary from time to time.

In my research, some people were able to exterminate thrips and they never came back.  That is what I am hoping for, because if pesticides are routinely necessary for roses, to me it is not worth it.

All of the sources stressed a few things.  Tackle thrips as soon as they are spotted because they multiply so quickly.  Keep debris from around the base of the roses to help prevent thrips from overwintering.  Always throw spent roses in the trash rather than in the compost to prevent spreading thrips.  Flooding the base of the roses may be useful in drowning thrips in the soil, which is where part of their life cycle is usually spent.

May 29, 2012 update:  A few days after spraying, it appeared as though all thrips had disappeared.  Then they started reappearing, so after seven days, I resprayed.  Today, on one of the newly rooted cuttings that had not been sprayed, I saw that the only bud was badly damaged by thrips.  Since Conserve should only be sprayed twice in a season, I decided to take drastic measures to try to get rid of all the thrips and prevent reinfestation.  I removed all buds and blooms from all roses and pruned back the larger roses rather hard, putting everything I removed in the trash. I then used a nozzle with a harder spray to wash off the remaining foliage on the roses that had not been treated with systemic pesticide and later sprayed them with Neem to get those I had missed.  I flooded the soil around all of the roses, as I have been doing about every other day, and sprayed the newly rooted roses with Conserve since they had not yet been treated.  If this does not work, I do not know what will.

June 2, 2012 update:  Though I have not purchased it and hopefully will not need to, I have learned of a new product called Naturalis O that may be worth trying.

July 19, 2012 update:  With the heat of summer, the thrips have all but disappeared.  Cooler weather is when they make their comeback.  Hopefully by then beneficial insects will have gotten them under control.

September 19, 2012 update:  After a very hot and dry summer, cool weather and rain have arrived. I keep check for any signs of thrips, but as yet, have found none.

See Beneficial Insects for an update and further information.
Planted by Garden Girl at 6:47 PM