Down the Chocolate Path

As with all gardeners, my style has evolved through the years.  At one point, much of the hardscape of my garden was reused/recycled materials.  For years I had a little pathway of recycled bricks.  Weeds became an issue, so Jim put landscape fabric under them.  That became a problem because the bricks could not seat themselves into place and the edge ones would often flip up.  Jim was going to take them all up, add sand and reseat them, but as he began the project, a different idea came to my mind.  Mulch!

Most mulch is chunky and I did not want that for a path.  I wanted something fine.  Pea gravel would be perfect ... for awhile.  However, it is hard to keep clean and it is hard to change if I change my mind, which has been known to happen.

At the botanical garden I used to work at, one of the areas had previously been mulched with cocoa hulls.  By the time I started, most had broken down, but there was enough left that I was fascinated with it.  A year or so ago I saw bags of it at Menards and was still impressed with it, but did not know exactly where I could use it at the time.  It immediately came to mind when I thought of mulching the path.

It looks wonderful!  The bag recommends a depth of one inch, but Jim put it two to three inches deep, so it is a bit loose to walk on.  Wetting it is supposed to make it mat down and perhaps it will compact with time.  The one thing about it that I did not fully realize is how fragrant it is. Throughout the whole yard is the smell of a baking cake!

The big warning with cocoa hull mulch is if you have dogs.  They may be attracted to it, and chocolate is toxic to dogs.  The bag recommends dog repellant if that is an issue. 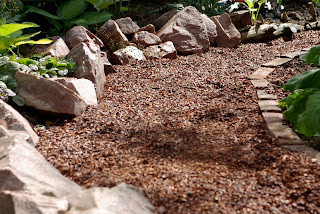 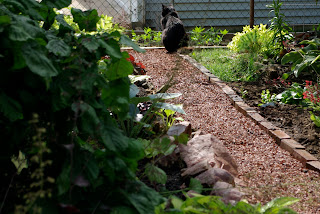 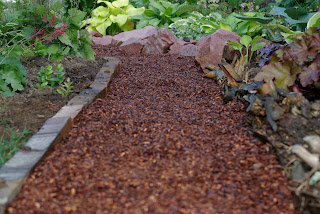 June 21, 2012 update:  After a bit of rain, gazillions of little worms started jumping like popcorn, but only on the cocoa mulch path.  A little searching, and it appears to be cheese fly larva.  I am not sure about this one, whether the mulch is a good thing to use or not, but considering that we have since put the mulch on some garden beds, there is not much that can be done about it now. I suppose the flies have always been around anyway, so the only difference now is that I know about them.

September 12, 2012 update:  I decided to use cocoa mulch on gardens throughout the yard.  A few of the larva appeared a time or two after the initial hatching, but it does not seem to be an ongoing occurrence.  I suppose after the oil and smell dissipate, so does the attraction.
Planted by Garden Girl at 7:17 PM

Email ThisBlogThis!Share to TwitterShare to FacebookShare to Pinterest
Labels: Mulch