Scent of a Rose

I used to think roses were a waste of time and effort. They were finicky and just waiting to get some rose disease and die. What was all the ado about anyway? Fragrance? What was everyone talking about? I have a very acute sense of smell and I never could find any scent. So people sprayed and pampered to grow sad looking thorn bushes that eventually sent up sucker growth from the rootstock before they died, just to get a couple of unscented blooms. Well, I exaggerate slightly, but you get the point.


A few years ago I started working for The Rose Lady. That is Jim's name for her because he does not remember names well, but he knows all of my ladies. After working in her garden and seeing her roses, it did not seem so hard. True, I had cemetery rose, a rose I had taken a cutting of in an old cemetery, and it thrived on neglect, but I thought that was an exception. Jim was taken with cemetery rose, too. His past experience had been with two dollar special roses that he was lucky if they survived for two years. After debating with myself for awhile, I told Jim I thought I wanted to try growing the coveted Austin Rose. He said I should, so I researched them, narrowed it down to a few, and Jim made the final selection for our first "real" rose.


I ordered 'Tess of d'Urbervilles' from www.highcountryroses.com and she arrived a few days later, ready to thrive. She grew like thunder and soon put on her first bloom. My excitement was replaced with confusion when the bloom did not look like the photos and there was NO SCENT! Had they sent the wrong one? After researching some more, I learned that until roses mature, they do not have their correct form, color, fragrance or strong enough stems to support the blooms.

It finally happened! Jim and I were walking through the garden and he stopped to smell the roses. A new one had opened, and as with all the others, it had to be checked. Jim smiled with delight and told me it was fragrant. I had to smell for myself. Ah, it was intoxicating and its form was different, too. So that Mom and Grandma could enjoy it as well, I cut it and put it in a vase on the kitchen table. Even over the smells of supper, the fragrance of Tess could be detected.


Why modern hybridizers bred for rose show form at the expense of fragrance is beyond me. I cannot help but admire David Austin's vision to combine old rose fragrance, plant and flower structure and ease of care with modern rose colors and repeat flowering. To think that marketers would not handle his creation of English Roses because they thought no one would be interested. I am sure he is laughing at them now.

See The Obsessed Gardener for information on rose care.  Also, Pass The Sniff Test for more about rose fragrance. 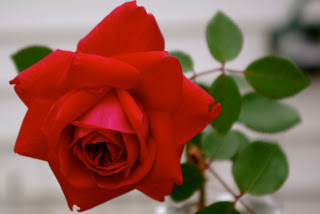 'Tess of d'Urbervilles' taking on mature form.
Planted by Garden Girl at 5:50 PM

Email ThisBlogThis!Share to TwitterShare to FacebookShare to Pinterest
Labels: Roses