I will momentarily digress from my garden rambles.  As Jim was preparing to take the flag down this evening, I saw a view that I wanted to capture, so went for my camera.  Growing up, because of the religion I was raised in, I was not allowed to celebrate Armistice or Veteran's Day (or any other holiday), so flying the flag has special meaning to me now.﻿  Those who sacrificed so much to give the right to fly or not fly the flag, as you choose, deserve to be honored. 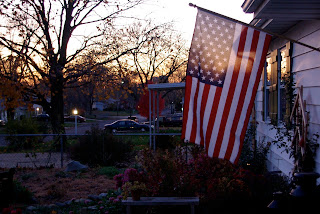 The U.S. flag proudly displayed outside our home.


In honor of Veteran's Day, we went to Texas Roadhouse, where veteran's were given a free meal.  Jim and his brother, Bill, were our men of honor.  Local schools had made cards thanking the veterans and each were given one. 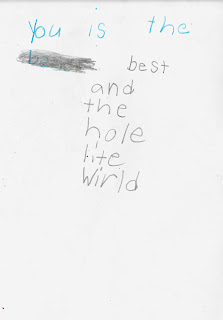 Jim's card of thanks.


On this day in 1918, my Great-Grandma was pregnant and my Great-Grandpa had gone to town when she heard guns in the distance.  Afraid that the war had spread to her Southern Arkansas home, she hid under the cotton pile on the front porch until her husband came home.  When he arrived, he brought the news that the war had ended and the shooting was in celebration. Nine days later, my Grandma was born.

Spiritually speaking, today is a very special day as well.  11/11/11 is significant in numerology.  Some even say that today marks the beginning of the Aquarian Age.  Maybe it is so, maybe not, but regardless, it has been a very special day for me.
Planted by Garden Girl at 4:55 PM