I love garden experiments; when successful, they are amongst the most rewarding endeavors.  I have never bought Poinsettias ... too seasonal, too much work, not long enough lasting.  I had always tried to keep them going without success.  For several years I had one small, struggling stick of a Point that I had saved from the botanical garden I worked at.  Last year Jim bought one for the holidays that still looked fairly decent come spring.  I decided then to give them one last shot, something different than I had ever done.  Normally I would have repotted and fertilized them with minimal results.  This time I put them straight in the ground in an area they would have a decent chance in.  If they were still struggling as the weather cooled, into the compost they would go.  Though hopeful, I was nowhere near expectant of the results.

I cut them back hard before planting them in the ground and did nothing more.  By September when I potted them up, what had not been much more than a couple of twigs were the lushest two-feet-tall Points I had ever seen.  As the weather cooled, they went into the garage, the door being opened and shut morning and night for light.  Before the first freeze, they came in and were put into an unused room.  To make shuffling around easier and to protect the floor, they were put onto a wheeled platform.  To begin with we put them in a closet at night, but then I questioned the need for absolute darkness, especially when they did not always have a lot of light during the day.  On sunny days when we could have the front door (southern exposure) open, they were wheeled into the living room.  Special attention had to be paid to watering.  They needed a lot and do not want to dry out, but they cannot be kept soggy either.  Some of the inner leaves shed, but not enough to effect their beauty. 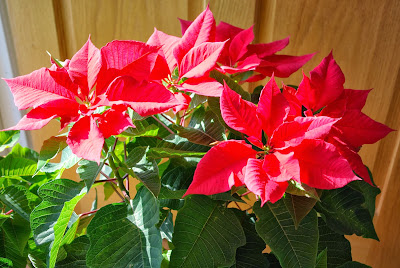 Another great idea is to cut the Point back to one stem and grow it into a tree.
Planted by Garden Girl at 12:14 PM

Email ThisBlogThis!Share to TwitterShare to FacebookShare to Pinterest
Labels: Pointsettias